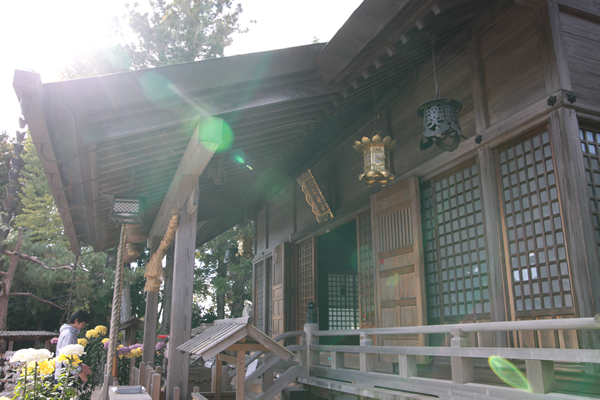 This shrine calls Futahashira shrines because it called it such as I pillar 2
of pillar.without calling 1 god with two from the old days.

According to the record of the shrine. this shrine was offered to Shurindan of lchinazaka in 1026.
(The present Nanakitada Azahigashiura neighborhood, old building of a shrine ground existence)

After Kokubushi perishes post town has come to be open to (in I658-) Nanakitada lchinazaka in the era of Dateshi, Predicting the
sacred place in the neighborhood of lchinazakanmuri river (Nanakitada river)even. This shrine it moved to the ground ar present in
April 1662.

Also in September of Meiji 5.it becomes the shrines of the villages of Nanakitada village, We did the fetival as whole the village.
And we were promoting the business of the maintenance etc, of grounds of a shrine.
Bul it was hit by a tragedy that shrine burned down by fire of unknown origin before down on Aunust 31,in Showa 4.
The present building of shrine completed it in May,in Showa 16 After Manchurian incident that time was when reaches and the procurement of the goods be difficult. In the era like that, with the effort as many as over 1O years of the executive/parishioners it finishd in May,in Showa 16.

This shrine calls the pseudonym "Niwataridaigongen".
In is said to be highly receptive to prayers as "Obostuko-Kamisama (the God for children)" that especially save children from sick and misfortune.

Young women who hopes a good match,Married couple without a child.
Parents who is tormented by the child of attending school refusal. Such persons who continuously visit this shrine from here and there including the Kanto area also in the present.

It continues that the communication which the good result was obtained and worship of the thanks giving from almost 90% of people.